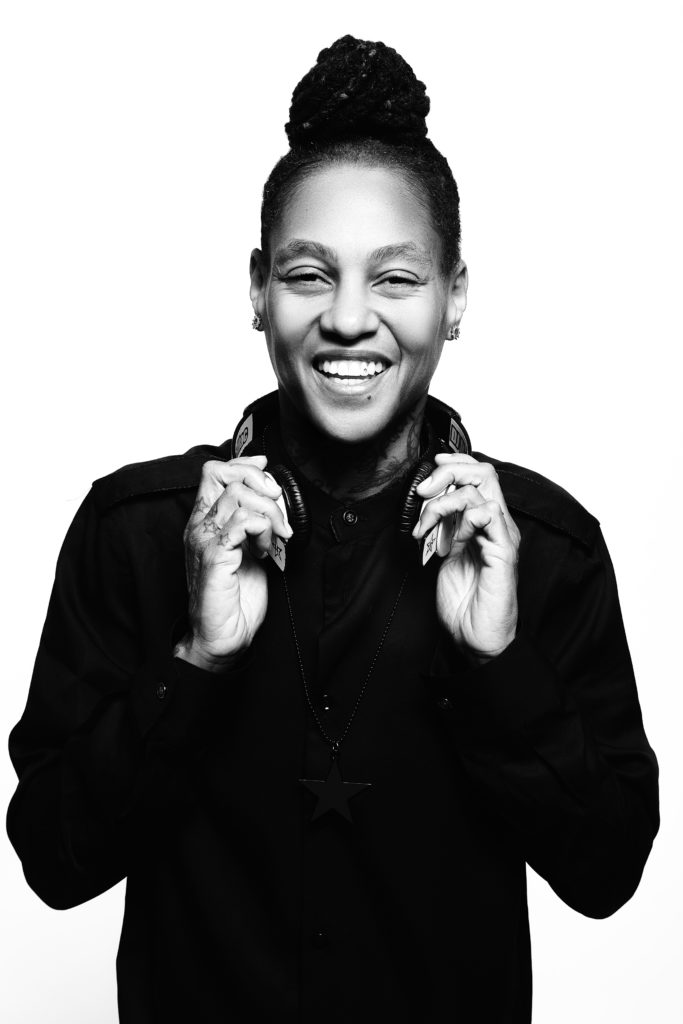 Mary was introduced to the art of turntables and mixing by her older brother while he practiced daily in the basement of their family’s Rosedale, Queens home. Barely a teen, yet highly intrigued by the techniques of the many notable DJ’s of that era, Mary began working diligently to hone and perfect her skills to also become a talented disc jockey. With a combination of natural talent, passion and cultural music influences from her Haitian background, this would quickly lead to Mary Mac becoming a highly sought-after female DJ.

During the early 90’s, Mac’s career was ignited during her full-time enrollment as a student at Mitchell College in New London, CT.  She quickly gained popularity by spinning music for many of the college parties in the surrounding areas. This would lead to Mary earning the coveted position of Music Director at Eastern Connecticut State University’s radio station for the next two years. Following her reign at the radio station, Mary Mac’s credibility flourished and started to become solid, as evidenced by the many doors which would begin to open for her.

Mary Mac’s introduction to the entertainment industry started when she was approached by a Def Jam A&R Executive while deejaying a NYC loft party. She was asked to DJ for their newest hip-hop artist at the time, a Midwest gangsta rapper by the name of Boss. This gig soon led to her involvement in the nationwide Phat Jam Tour of 1992, which featured Def Jam hip-hop recording artists Run DMC, Redman and Onyx. DJ Mary Mac and Boss opened for each show across the entire span of this several month tour. By the mid 90’s, Mac’s recognition as a DJ became well-established, leading to invaluable opportunities key to her growth as an artist of the turntables. Mary was continuously booked as the resident DJ for various national events and celebrity parties ever since this first opportunity to spin on a bigger platform.

Over the course of time, Mary Mac continued to make quite the name for herself.  In the beginning, she was booked as a DJ for the celebrity birthday parties of the legendary Whitney Houston, Queen Latifah, MC Lyte and Queen Pen; promotional release parties for Cassidy, Fatty Koo, Dead Prez, Hush Magazine, Monica, Clipse and Kimora Lee Simmons’ launch party for the “Beautiful” fragrance; events hosted by The Brooklyn Museum, Miss Jones, Monie Love, DJ Kid Capri and America’s Top Model winner Eva Pigford. In addition, she’s played alongside recording artists such as Red Café of Def Jam West, Cheri Dennis of Bad Boy Records, Jimmy Cozier of J Records, Da Brat of So So Def, Black Buddafly and Teairra Marì of Def Jam and Robin Thicke of Interscope Records. Mary continued to impress the world with her talent by spinning special events such as the “Tribute to Luther Vandross” and Hot 97 Radio Station’s annual concert for non-profit organization Rockcorps.

DJ Mary Mac has spun with the likes of many other deejays such as Clue, Enuff, Funkmaster Flex, Jazzy Joyce, Mad Linx, Mister Cee, Spinderella, SNS and several other influential DJs in the industry. As of 2013, she has been well-known as the resident DJ for the iconic entertainer Madonna.  Mac has rocked out as the headlining DJ for Madonna and Guy Oseary’s Oscar After Party as well as the Opening Act for Madonna’s Rebel Heart Tour, Prince and The Revolution, Stevie Wonder, Sting, PittBull, Metallica, Mark Ronson, Kanye West, Nas, Snoop Dogg, Jane’s Addiction, Lucas Nelson, Lil Kim, Bebe Rexha, Nicki Minaj, Cardi B, Remy Ma, Will.I.Am, Asap Rocky, Pharell, Gwen Stefani and Ashton Kutcher’s South By Southwest SXSW After Party. Of the many tours that Mary Mac has been included on, they started as far back as 2002 when she was also invited to the Grey Goose Tour featuring Lady May, Lil’ Jon, Bone Thugs-N-Harmony and 8Ball w/ MJG. Today, she is the resident DJ for Martha’s Vineyard Music Conference & Festival – MV Summer Madness.

Aside from the music industry, Mary Mac has made several cameo appearances in publication, television and radio such as VIBE Magazine; Fox 5’s comedy show “In Living Color”, The Rosie O’ Donnell Show with Queen Latifah and Rap City’s “Tha Basement”; a regular on 91.9 FM’s “The Next Up Show” and as one of Wendy’s favorite DJs, in the past has been a part of “The Wendy Williams Experience” on WBLS 107.5 FM and more recently invited to spin on her nationally syndicated program The Wendy Williams Show and also chosen by Wendy to deliver her talent for an AIDS marathon.

Determination and commitment have driven Mary to expand her horizons into many other talents such as songwriting and producing.  She released an album titled “Life featuring recording artist Phatt PussyCat” under her alias “DJ Predator” in collaboration with recording artist Roman Anthony of the UK on the Scotland record label, Glasgow Records.  Mary also crossed over from music to photography, unveiling Mary Mac Photography in 2009. Her elite nightlife photos can be seen on Blogspot and Facebook from events across the East to the West coast. She’s photographed A- List celebrities such as Nicki Minaj, Lil Kim, Lisa Raye and Amber Rose.  In addition, Mac is part of the documentary “MIXTRESS X: THE MOVIE”, which followed and showcased the life of female DJs in the 90’s.

Mary Mac is continuously exemplifying her role to pioneer for female DJs all around the world. She remains firm in mentoring and paving a way for the next generation of female disc jockeys scattered about in her over 12,000 social media followers. In 2013, Mary Mac was featured in the Huffington Post online article “23 Inspiring Women Who Are Blazing Trails for the LGBT Community” recognized for all of her accomplishments over the past 20 years. Nevertheless, Mary Mac remains humble and just wants the world to feel good through reflections of her sound and energy each and every time she spins.

DJ Mary Mac of NYC… to be continued!