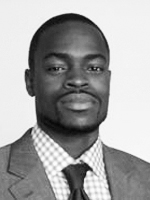 Before representing Haiti, Samyr was an NCAA All-American in college who held the Ivy League conference record for a time. He still holds the Harvard University record in the triple jump. Samyr earned degrees from Harvard, the University of Texas and Georgetown University’s law school. He is a member of the New York State Bar and was recently named the director of player relations and competition for Major League Soccer. Samyr’s non-profit organization, Jump for Haiti, aims to make a lasting impact in the lives of children in Haiti through sport and education.