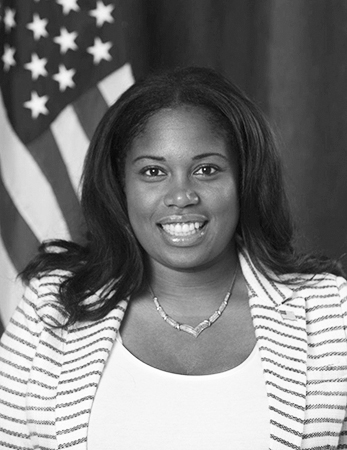 Ms. Jean-Pierre has extensive experience in economic development. Before running for office, she was vice president of properties at the Town of Babylon’s Industrial Development Agency (IDA), the agency is responsible for providing incentives to companies to attract jobs and retain companies in the area. She was also director of the Town of Babylon’s Wyandanch Resource Center.

In 2008, she went to work for the Suffolk County Legislature as a legislative aide to DuWayne Gregory. Two years later, she moved to a position as community outreach coordinator for U.S. Rep. Steve Israel.

Ms. Jean-Pierre is the daughter of immigrants from Haiti. She earned a Bachelor of Fine Arts in Creative Writing at Brooklyn College in 2005 and a Master’s in Public Policy in 2007 at Stony Brook University.

She has demonstrated a strong commitment to a number of  causes. During her undergraduate studies, she interned for the New York Public Interest Research Group (NYPIRG) and lobbied against tuition hikes. She is also very involved in the Haitian-American community and is the former Vice-President of Haitian Americans United for Change Inc., (HAUC), a community grass-roots organization. After the devastating earthquake in Haiti in January 2010, the HAUC team worked with local not-for-profits, clergy members, local businesses, and various governmental agencies as one of the lead organizations on a Haiti Relief Project, with Ms. Jean-Pierre as the coordinator.