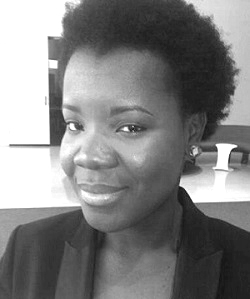 Nadege Fleurimond is the owner of Fleurimond Catering, an off-premise Catering Firm in New York City, specializing in corporate and private functions. Utilizing her Haitian culinary background as a guide, Fleurimond pulls in worldflavors from Asian, Latin American and European Cuisines. Her company has catered for companies and institutions such as Ann-Hauser Busch, Olgilvy & Mather, Columbia University, Paul Weiss, New York City Hall, BET News, and The Colbert Report, as well as individuals such as Vivica A. Fox, Al Jareau, Wyclef Jean,  and Dr. Memet Oz’s organization Healthcorps. She believes that good food crosses country lines and is an effective vehicle for bringing people together. She proves this philosophy with her weekly cooking parties of 15- 20 attendees, who come together to learn how to make great world cuisine ranging from Thai, to Italian to African and Haitian. Her students describe her as fun and a “leader who is not afraid to follow.”

In her recently published memoir, Taste of Life, Nadege Fleurimond carries this theme even further. Using short anecdotes, she depicts  the events of her life through a food inspired lens. The book is a humorous journey into the life of Nadege Fleurimond as she navigates her way through the world of food and the experiences with her family, friends and acquaintances she encounters. Part cookbook, part Memoir, Taste of Life offers readers an opportunity to view their own lives through a culinary lens and appreciate the beauty of food, family, friends, and simple pleasures.

With varying interests in business, government, and social issues, Nadege graduated with a degree in Political Science from Columbia University. Upon graduation, she worked for then New York City Council member Yvette Clarke serving as project manager and community liaison. A strong community activist, Nadege gives much of her time to social causes, especially those dealing with the Youth. To that end, she founded Young Culinary Masters(YCM) and served as executive director until 2011. YCM’s mission is to  educate young people and bring about a positive change in their eating habits and encourage a healthy lifestyle

Fleurimond has been quoted in the New York Times, has appeared on the national television show Chopped on the Food Network, and was Food columnist for the Haitian Times newspaper from 2008  to 2011. in 2010 she was invited to cater the Haitian flag Day celebration at the white house and In July of 2011, she was invited as the special guest of honor to share her expertise on food at the Guadeloupe Culinary Festival. She is also the recent recipient of the New York Media Alliance’s Ethnic Press Fellowship for 2010 covering the education beat. She also is the recipient of the 2011 Feet in Two Worlds, food writers fellowship.

She also serves on the board of Columbia College Young Alumni Board.