Update (December 22) – According to NY1, Hot 97 has announced that Cipha Sounds has been taken off the air indefinitely and has been instructed to take sensitivity training focused on the Haitian community. 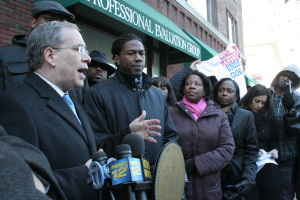 Cipha Sounds, whose real name is Luis Diaz, has since walked back his comments. In an on-air apology, Sounds called his joke “stupid” and “tasteless” and said he was embarrassed. “I do nothing but rep for the Haitian people,” he said. The apology came after the hip-hop and R&B radio station saw a backlash from listeners, including complaints on Twitter and Facebook.

Community leaders and elected officials — including those of Haitian descent — who gathered on Tuesday, however, said that Sounds’ apology wasn’t enough. “Don’t get it twisted,” said Manhattan Deputy Borough President Rosemonde Pierre-Louis, who is Haitian American. “This is only the beginning.” New York has the largest Haitian immigrant population in the United States.

A spokesperson for the radio station could not be reached for comment Tuesday.

Sounds isn’t the first Hot 97 DJ to come under fire for offensive comments about people of specific ethnic groups. In 2005 a couple of staffers were fired by the station after a tsunami-relief parody containing racial slurs about Asians aired.

Those gathered at today’s event, which was part protest but mostly a press conference, are hoping for the same outcome. They are calling for the radio station to be held accountable and terminate the employment of the on-air personality, who co-hosts a highly rated morning show, The Cipha/Rosenberg Experience, with Peter Rosenberg. The station should reach out to AIDS organizations to educate people about the incurable disease, protesters also said.

Barbara Fortune, a Haitian-American college student, said she felt insulted and disrespected when she heard Sounds’ comment. Fortune, who describes herself as a person who has always had cultural pride, said it’s why she attended the press conference. “HIV has been around for years now, and it’s not something that only Haitian people have,” she said. “A lot of people have it. It doesn’t discriminate.”

For the full story, visit The Root.