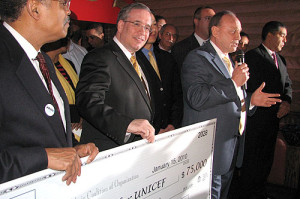 City and state elected officials turned out for a major fundraiser in West Harlem Friday to benefit victims of Tuesday’s catastrophic earthquake.

“We’re very much hurt by what’s happened in Haiti and we want to be part of the solution,” said Manhattan Assemblyman Adriano Espaillat.

Manhattan Borough President Scott Stringer helped organize the fundraiser with help from the groups Haitian Roundtable and Hispanics Across America.

“Tonight is going to be about a commitment and a celebration and a rejuvenation and a dollar commitment to help people most in need in Haiti,” said Stringer.

“What we get from stepping out and giving so many times enhances our city and the collective spirit of our people,” said Paterson.

“I actually just got a text message from a doctor who is on the ground, who says they are desperate for doctors and nurses right now,” said Daphne Leroy of the Haitian Roundtable. “With each passing day, it is critical that we continue to do what we’re doing tonight, which is to really unite and raise funds so that we can start to rebuild the country.”

For the full story visit NY1.